(Originally released in 1993 as Stardust Dreams) 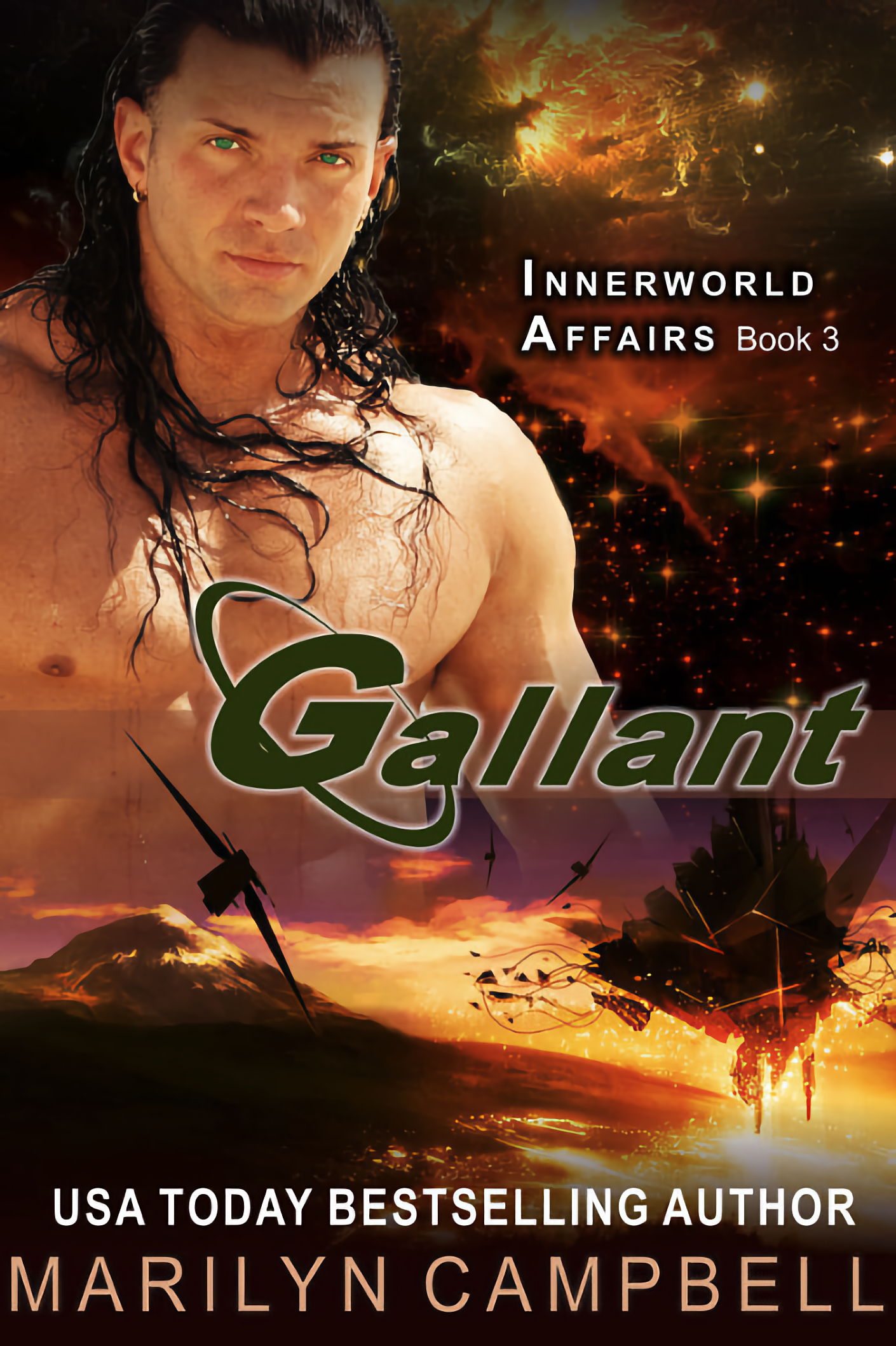 Cherry Cochran's exciting life as an actress in Innerworld abruptly changes when she witnesses a murder and is kidnapped “for her own protection”. Her piratical captor, Gallant Voyager, is a fearsome agent for the Consociation of Planets, but he has no idea how much trouble he brought on board his ship when he snatched Cherry from her adopted home. Their personal war begins as they head for a distant galaxy and dangerously escalates as primitive passions ignite a different sort of battle. Cherry thinks she’s winning…until she discovers the terrible secret of what Voyager really is and what his existence could mean to Earth’s future. Cherry’s adventure takes her to alien worlds inhabited by strange, wonderful and deadly beings bent on ending both their lives.

Breathtaking romantic adventure. Marilyn Campbell makes her mark as one of the great icons of the romance genre.

Stunning! Marilyn Campbell is the queen of futuristic romance.

Marilyn Campbell simply excels in futuristic romance. Nobody does it better!

Explosive… Fascinating …will fire your imagination as well as your temperature… Put this provocative book at the top of your must read list.

"It'll have to wait until we're off-planet," Gallant muttered as he flipped switches and pressed keys in the panel. Mar was busy bringing a grid up on his screen and, when Cherry tried to speak to Dot, the female placed a finger to her lips and closed her eyes.

"Sit!" Gallant barked at her.

She was tempted to try standing throughout takeoff just to defy him but her obstinacy didn't go so far as to risk injury. For the next several minutes she remained quiet, outwardly. Inside, she was ranting and raving. At least the enforced delay gave her a chance to rehearse all the rotten names she was going to call him.

Gallant stretched out the take-off procedures as long as possible, hoping for two miracles—that Cherry would calm down and that she would forget what he said about making the drillfly disappear. He may as well have asked for the Supreme Being to make an appearance in the cockpit for all the good hoping did him. The second the ship settled into cruise mode, she was on her feet in front of the panel, ready to tear him to pieces.

Cherry faced him with her fists on her hips, took one deep breath, and fired. "You are the most despicable, vulgar, disgusting, lying, cheating—"

Simultaneously, Cherry and Gallant turned to him and demanded, "What!"

Mar gave them a pleasant smile. "You neglected to inform us of our destination."

"Earth," Cherry countered. "You swore you'd take me back if I helped you. Considering what you just put me through I'd say you owe me a hell of a lot more than a ride home. How dare you leave me like that? I could have been killed!"

"You weren't in any danger of being killed... at least not right away."

"Excuse us," Dot interrupted. "Do you think you could settle this matter elsewhere while we plot our course? Your... discussion is somewhat distracting."

"Fine," Gallant said with a huff and rose from his chair.

"That course had better be for Earth," Cherry warned as she followed Gallant into the corridor.

"Lore!" Gallant called over his shoulder. "I'm still the captain on this ship."

"Only as long as I let you live," Cherry said to his back.

His frustration showed as he slammed his fist against the door opener for his room. Not to be outdone, as soon as they were inside, Cherry hit the panel just as hard to close the door again.

Holding the length of chain in front of her, she demanded, "You get this damn thing off me before I use it to beat you with." As soon as she was free of the collar, she resumed her verbal attack. "What you did to me back there was the lowest, most wretched thing anyone—"

"You were never in any serious danger!"

"How would you know? You left me with those... those creatures, to do who knows what!"

"I wouldn't have had to leave you at all if you hadn't taken my cubes out of my vest!"

"I wouldn't have taken them if I hadn't found out you were using them to cheat."

"And I wouldn't have had to cheat if you had just been reasonable and agreed to cooperate with me to begin with!"

"Considering how you ended up abandoning me, I was right not to agree."

"I never abandoned you. I was right outside the whole time. Anyway, I knew Frezlo wouldn't allow anyone to touch you once he decided to use you himself."

"And who was the brainy bastard who put that idea into his head? He only wanted to kill me before you made it sound like Sinbar had enjoyed me so much he should try me himself!"

Gallant grinned in spite of himself. "That was rather quick of me, wasn't it?"

"Quick? There was nothing quick about how long it took for you to rescue me."

"I told you before. You weren't in any serious danger. The mating ritual of Frezlo's species is extremely long. I was waiting outside his door until I heard the sounds that let me know you had him completely distracted."

"That shows how much you know. All I was doing was brushing his hair... not that that wasn't gross enough!"

"Not to him. For Frezlo, a good grooming is the most sensuous foreplay there is. Unlike humanoids, his hair contains nerve cells."

"Are you telling me that while I was untangling knots, I was actually... arousing him?"

Gallant couldn't resist. "You heard what he said—you were the best ever."

"O-o-oh! I hate you!" Unable to speak another coherent word, she raised her fists, prepared to express her anger physically.

He blocked her attack and ordered, "Stop it. I'm getting sick and tired of you hitting me without reason. The next time you do it, I'm going to hit you back."

"Ha! You already did that, remember? In fact, I think you cracked my jaw." She rubbed the spot he had struck for effect.

"I had to do that to save you from Sinbar! Surely you realized he was drawing you into a trance."

"Of course I did. But you still hurt me." She tried to hold on to her anger, but suddenly, uncontrollably, tears filled her eyes and she stammered out the truth. "I've never been so scared in my entire life." His arms opened and the offer of comfort—even from him—was impossible to resist.

"I swore no harm would come to you. You should have trusted me," he said, holding her tightly against him.

She tipped her head back and frowned at him. "How could I trust you? You're a liar and a cheat and—" Before she could utter another insult, he silenced her with his lips.

This kiss was no less of an assault than the other two they'd shared. Only this time, her blood had been boiling beforehand. The strange tingling she had previously experienced in her robotic arm shot through her like a lightning bolt.

Suddenly Cherry felt as though she had been caught in a raging hurricane and the only escape was through the eye of the storm. She relayed her need in the most elemental way. Tangling her fingers into his thick hair to hold him still, she drew his tongue into her mouth, nipped and sucked, then forced her way into his.

His fingers curled beneath the neckline of her jumpsuit and she stopped stroking his arms and chest to help him eliminate one more obstacle between them. Suddenly his hands closed over hers and prevented her from undressing further. She felt his body go rigid and realized he was trying to rein in his passion once again.

"No! Not this time, Gallant." She pried one hand loose, ran it down his body and molded her fingers over his hard, pulsing shaft. The realization that her eyes hadn't been mistaken about his size made her take a deep breath of anticipation. "You want me. I want you. Right now, nothing else matters."

Another low growl was his only answer before desire swept away whatever had caused him to hesitate. Only when they tumbled onto his bunk completely naked did he try to speak. With every inch of their bodies pressed together, she felt as much as heard his low, gravelly voice.