(Originally released in 1992 as Topaz Dreams) 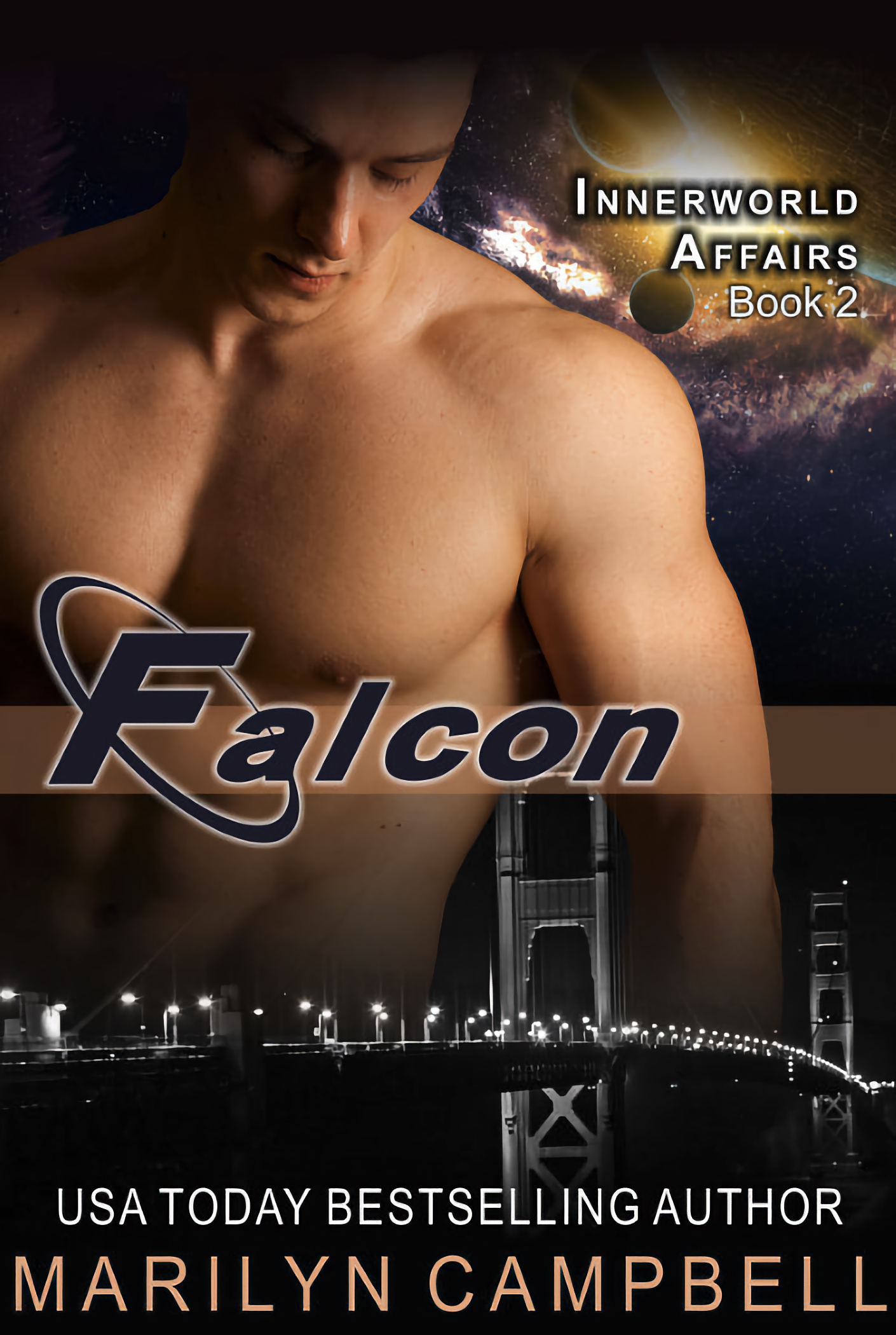 Falcon, a gifted half-breed tracker, is in San Francisco to retrieve a ring stolen from Innerworld, located in Earth's core. Too many Terrans are dying at the hands of the billionaire thief experimenting with the ring to gain access to Innerworld.

What should have been a simple assignment is quickly complicated by repeated encounters with Stephanie Barbanell, a Terran investigator hired by the wife of a scientist kidnapped by the billionaire.

Stephanie has always worked alone, and Falcon is not worthy of trust. But joining forces with the mysterious man seems the only solution to rescuing her client's husband... until the forced proximity ignites overpowering and unwelcome desires.

Stephanie's experience has taught her that sex equals loss of independence. A sexual virgin, Falcon believes submission to his human half will strip him of his superior abilities.

But success of the mission will require both... regardless of the loss.

Campbell’s Falcon is a magnificent achievement, a simply splendid embodiment of every woman’s secret fantasy. Topaz Dreams deserves a place of prominence on your bookshelf.

A story that grabs you from the beginning and won’t let go. I enjoyed it immensely!

Ring! Steve's hand lashed out for the receiver before the telephone had another chance to sound its alarm.

"G'mornin'," she mumbled through what felt like a mouth full of alcohol-dried cotton.

"Don't tell me you're just waking up! In case you've forgotten, today is Thursday, not Saturday or Sunday." Dokes was teasing, of course. He knew very well that with her two young children she was always up with the sun.

She hung up, glancing briefly at the other bed where Falcon began to stir. Quickly, she headed for the bathroom, deciding to put off facing him for a few more minutes. As she splashed cold water on her face, she assessed her physical condition. Her head pounded ferociously but some aspirin would take care of that. Stomach queasy but not rebellious. Juice, coffee and toast should help. She had not had so much to drink since the night her divorce was finalized and now she remembered why not. Hopefully, Falcon was the understanding sort. He had told her at dinner he never drank alcoholic beverages. So now he had proven he was faster, stronger, more professional and smarter.

Slowly, she opened the door, preparing her apology as she did so, but the words never left her mouth. Falcon stood by the bed with his back to her—his perfectly sculpted, very naked back.

Steve knew the polite thing would be for her to turn away or to clear her throat so he would be aware of her presence in the room, but that would be like one of her children giving back a lollipop after taking the first lick.

She was totally awed by how magnificent his body was, from his wide, solid shoulders, down his muscled back, to his toned thighs and calves. Perfectly molded buttocks flexed as he bent over to slide one long leg into his slacks. No wonder she had felt every intimate inch of him so clearly. He wore no underwear.

The back of Falcon's body was flawlessly smooth, like his chest and arms. If he had any body hair, it was so blond and fine it was unnoticeable. Steve understood American Indians had little or no body hair but Falcon said he was from Wales. She could not help wonder if he turned around—

Then he did…just as his fingers closed the waistband on his designer-quality fitted trousers. Steve instantly felt her whole body warm under his shockingly hungry gaze that swept from her head to her bare toes. An image of the white tiger in the garden flashed in her mind.

Steve's heart picked up its pace as she realized her cotton nightshirt hid very little and her nipples instantly puckered in response. She had the distinct impression he had been aware of her appreciative scrutiny and was returning the compliment. Unlike her, however, he didn't appear to be the least bit embarrassed.

"Good morning, Steve," he said in the resonant voice that stroked her like a velvet glove. "That shirt looks familiar. I believe I like the way you wear it better." He gave her a crooked grin and turned around again as he donned his black shirt.

Steve couldn't be positive, but it sounded like he was actually making a joke. Damn! His lack of a sense of humor was the one thing she thought she could find fault with him. As she rooted through her bag for clean clothes and a toothbrush, she decided to get the worst of her discomfort out of the way.

"Uh, Falcon, I want to apologize for last night. I know getting drunk was stupid and it's hardly an excuse for behaving so badly. I mean, it was very unprofessional of me and I assure you nothing like that will happen again. I was just really excited about the money and—"

"It is quite all right," he cut in. "Please do not upset yourself further about it. Was the call important?"

"It was Lou. I told him I'll call him back." Steve headed for the bathroom then turned back to him. "Wait a minute. Why should I be the one apologizing here? After all I'm not the one who started it. You did! In the desert. You kissed me twice without my invitation." Hell, she had enough to feel guilty about without feeling bad about something that was not all her fault.

"I did not start the fight, Steve. You did."

"There's a hell of a lot of difference between fighting and kissing!"

"Yes. And I have decided I like kissing much better."

"I don't give a damn what you like better. You owe me an apology."

She blinked in surprise. "And why not?"

"I am not sorry. As I said before, you taste very interesting. I do believe, however, that we should refrain from such activity during our search as it does tend to be distracting."

"We should refrain? Of all the cocky, macho…" Steve was across the room in four big strides and, with a frustrated grunt, she shoved him onto his bed. "You just keep your hands and your mouth to yourself and we'll do fine, because I have no intention of touching you again, even for a much-deserved punch in the nose." In a huff she disappeared into the bathroom, slamming the door behind her.

Falcon sat staring at the closed door and could not help but chuckle. Steve was upset with him but she still felt attracted to him. What a fascinating contradiction. In spite of the fact that he had spent most of the night reminding himself why he had to keep his distance from her, he had to admit being around Stephanie Barbanell was too much fun for him to keep his distance from her. He had never considered that this journey to Outerworld would be as entertaining as it was educational.