2 sexy rom-coms in 1 pretty package!Man With A Plan & Lucky Lady 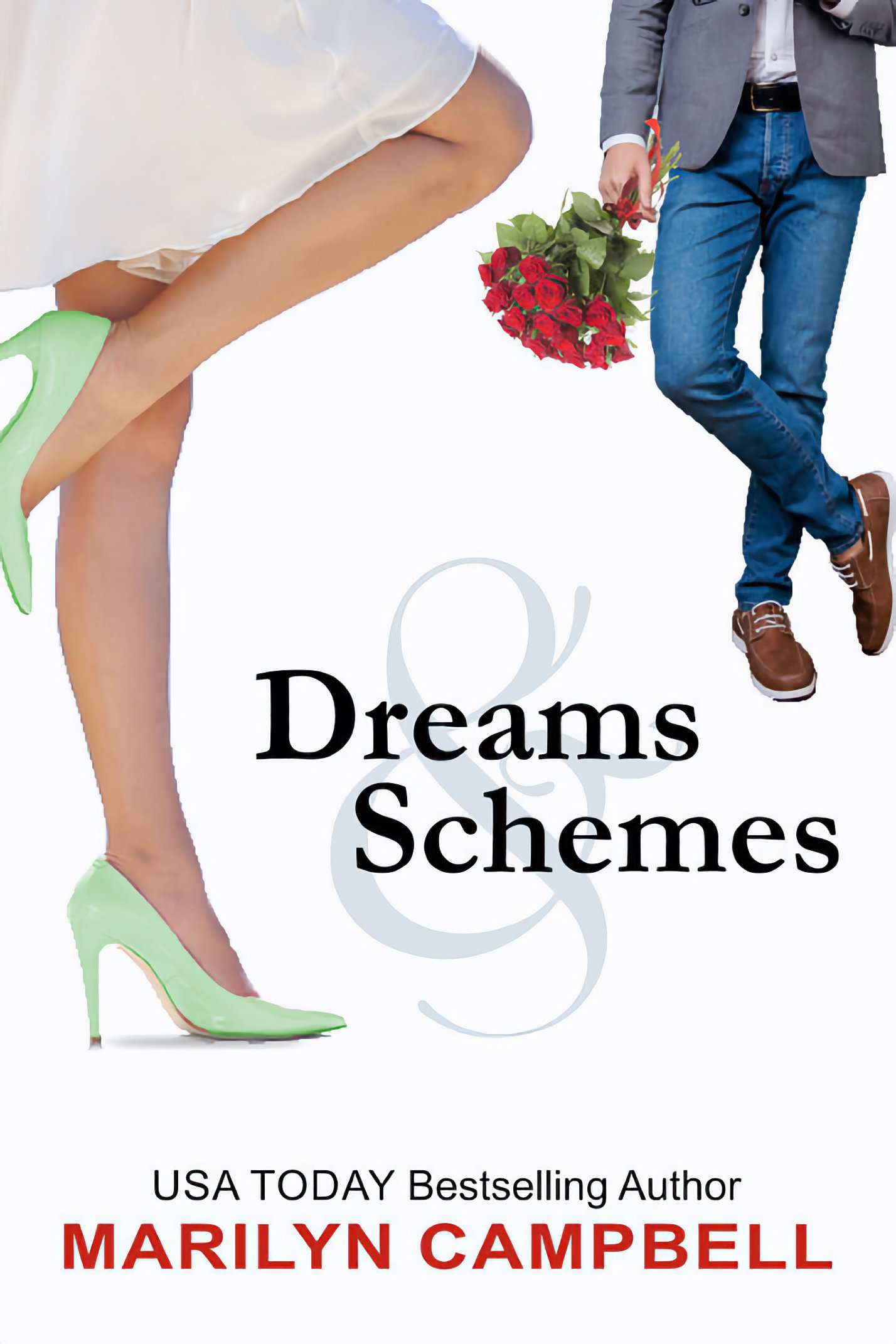 Man With a Plan
Miami police officer Jake Slaughter arrives home after a double shift, made worse by a messy homicide, prepared to shower and sleep for a week. But discovering an intruder in his home has adrenalin pumping through his bloodstream and he draws his gun...on the young woman scrubbing his bathroom shower. He had forgotten it was cleaning day, but he knows she isn't his regular lady.  He would never have forgotten those big blue eyes or her bravado.
Temporarily covering a few of her sister's cleaning service accounts, Kathy Alvarez had wondered about the solitary cop whose tidy house she had cleaned the last several weeks. She just hadn't imagined him naked or pointing a gun at her. Nor could she have guessed he might be so dangerously sexy. She intends to avoid him in the future, and yet, when he offers her a short-term job helping him while he is bed-ridden after an injury, her desperate need of income forces her to accept.
Though the physical attraction is strong and mutual, they quickly realize their life plans are incompatible. Jake wants an old-fashioned marriage with a stay-at-home wife and mother. Kathy's dream is to be an interior designer and, after an abusive marriage, she vowed that no man would ever again possess her.
A relationship of any sort is out of the question...unless one of them learns to compromise.

Case Hardin didn't recognize the attractive blonde shooting pool in his Family Fun Center. But he did recognize trouble when he saw it. Despite all his efforts to remain out of the public eye, she had tracked him down. He knew she was no amateur after a few minutes of watching her play. And from her tight jeans and T-shirt, he could see she had the right curves to throw off the game of the steadiest pro. But who was she and what did she want from him?
Joey Duval was twelve years old when she met "Hard-Case" Hardin in the back room of her parents' pool hall. To a chubby girl with pigtails and braces, the man seemed like Prince Charming with a pool stick. Rather than being annoyed over a child sneaking into the smoky male sanctuary, he treated her like a princess. Stricken with a bad case of puppy-love, Joey taught him her secret 9-ball trick and, in exchange, he promised her a favor whenever she might need one.
A lot of things had changed since the night Joey met Case. The awkward adolescent had become a beautiful, well-educated woman and Case had left the world of competitive pool behind. But Joey never forgot her brief interlude with the legendary shooter. He owed her a favor.
And now, thirteen years later, she'd come to collect.

Man With a Plan

As soon as his garage door was lowered, Jake stripped down and left his clothes and shoes by the washing machine. Being a police officer in Miami was always a sweaty job but after a double shift that included a messy homicide, it was also a filthy one. This was just one of the ways he kept his job out of his living space. Gun belt in hand, he went inside but came to an abrupt halt at his bedroom door.

Someone was in the master bathroom. He could hear a scratching noise and labored breathing. Damn! Some kid probably broke in and was scrounging around in the medicine cabinet looking for drugs.

In his own home.

Quietly, Jake lowered the gun belt to the thick carpet and removed his gun. He edged along the wall until he could glimpse a reflection in the bathroom mirror. There was a figure inside the shower stall but the cloudy glass doors blurred the image.

Despite his exhaustion, adrenalin instantly pumped into his bloodstream, bringing him fully alert. In one motion, he pivoted into the bathroom, shoved open the glass shower door and pointed his weapon at the trapped quarry.

The intruder jackknifed from a squat to an upright position, but bare feet lost traction in a soapy mess on the tile floor. Arms flailed, hands desperately groped for something to stop the fall, but there was no help for it.

Kathy's backside hit the shower floor seconds after the opening door had scared the breath out of her. She stared up at the naked man looming over her. Rape! her mind screamed as she registered the meaning of what her eyes interpreted. Scooting quickly to the corner of the stall, she wielded the only weapon at hand—the toothbrush she had been using to scrub the tile grout.

The man's gaze passed over her face and body to the toothbrush and he smirked in such a nasty way her fear lurched up another notch. She remembered reading that a rapist might be discouraged if his victim made him see her as a real person. It was a long shot, but she had to try.

In a soft, calm voice, she spoke to her would-be attacker. "There's no reason for that gun. I'll do whatever you want. Just, please don't hurt me." Though he was clearly listening to her, he did not lower the gun. "My name is Kathy. This isn't my house. I only clean it once a week. The man who lives here is a cop with a really bad temper and he won't hesitate to shoot a trespasser."

The dangerous-looking man blinked and squinted at her as though he was having a difficult time understanding what she was saying.

That only got her one raised eyebrow. What was he waiting for? Her fear of being raped was reduced by a flash of impatience. "I'm serious. The officer will be home any minute. And he really is very unstable. You need to get out of here while you still can." She slowly got to her feet only to realize he still towered over her, but at least she was no longer staring at it. She pressed herself against the back of the shower and waved the toothbrush at him.

The man remained blocking the shower opening. When he finally decided to talk to her, his voice was low and gritty. "I am the bad-tempered cop that owns this house and you are not the woman who cleans it. Now, Kathy, how the hell did you get in here?"

Kathy gulped as her gaze traveled from his dark, narrowed eyes over an incredibly well-toned physique then darted back up. This was Jake Slaughter? Good grief. She didn't know whether to be relieved or mortified. "Umm... how do I know you're telling the truth?"

He arched one brow at her again. "I don't have to prove anything to you. I'm holding a gun and you're cornered."

Joey knew she could easily make the practice shot Case had set up for her. It was his pool table but she had been playing the game since she was a kid. So how had she failed to sink the target ball twice in a row?

She hated to admit it, but his proximity was messing with her concentration. Taking a slow breath, she ordered herself to ignore him. On her third attempt, the cue ball rebounded back into the side pocket for a scratch.

Case gave her a look of disbelief. "Okay. Set it up one more time and I'll guide you through it."

When she was poised to shoot, he moved close behind her. "You're putting too much force behind your strike. For this shot you need a gentle touch."

Joey flinched as his body bent over hers and his arms bracketed hers, but she understood what he was doing. Her father had used this technique plenty of times when he was teaching her the game. By placing his cheek against her head, she understood that Case was able to judge the shot from almost the same angle she could.

With his hands covering hers, he slowly eased the stick back and forth a few times. "Loosen up, Joey. You're making it harder than it needs to be. Just relax and let me do all the work."

His voice seemed to grow a little huskier with each word, making Joey wonder if he was purposely making his instructions more suggestive than necessary. Then she realized it was probably another one of his distraction tests and ordered her overactive imagination to settle down.

"All you want to do is give that ball a little kiss. You know how to kiss, don't you?"

Joey's increased pulse rate made her ears ring. With his body wrapped around hers the way it was, she could barely focus on what he was telling her to do. "What?"

"Kiss it," he whispered into her ear.

Kiss—pool slang for the slightest contact. There! She remembered that much. Now she just had to do it.

She shifted from one foot to the other without thinking of the effect that would have on the placement of her hips, but his reaction was to shift his hips to stay with hers. "Okay," she forced herself to say in an almost normal voice. "I'm ready."

She held her breath as he guided the shot, letting her feel the way it should be done. The balls on the table did precisely what he wanted them to, but he didn't move away from her.

"How did that feel?"

She swallowed hard. She couldn't let him know that she had no idea what he had just done, but whatever it was, it felt wonderful. "Fine. I, uh, I can do it myself now.''

He released her slowly, letting his hands skim her forearms as he did so. "Are you sure? We could do it one more time."

Yes! "No, that's not necessary." Once said, she stepped away and set up another ball on the opposite side of the table. She spared one glance at him before she tried again, and saw that his eyes were on her, not the balls.

His intent was clear as he rounded the table toward her, and this time she didn't back away. His eyes trapped her as firmly as his body had a moment ago. Maybe it wasn't just her overactive imagination. The pool stick slipped out of her hands and she straightened to face him directly.

She noticed his hand trembling ever so slightly as he raised it between them and she could not stop the soft sigh that whispered over his wrist when his fingertips caressed her cheek. Nor could she move away when his head dipped slowly toward hers.